These Come From Trees in Germany: A Twitpic

Was checking out mentions of "These Come From Trees" on Twitter today (here's the search I was using), and lo and behold, saw this great TwitPic post by Justin Küblbeck of Germany. Apparently some enterprising person in Germany posted these about...including on a toilet paper dispenser. That's commitment! Wow.

We don't do as good a job as we could in documenting the international locales that TCFT stickers end up at, but suffice it to say, roughly 15% of sticker purchases are from outside the US, even non-english speaking countries.

Off the top of my head, I can recall the Canada, UK, Ireland, Norway, Sweden, Germany, Denmark, France, Japan, Saudi Arabia, Kuwait, Indonesia, Australia, and Brazil. I should go back and look at the Paypal reports and Google Analytics traffic, and do a post on the international footprint to date...

We haven't had anyone localize These Come From Trees stickers into German, like they have been for Italian and Arabic, but if anyone would like to, let us know, and we're happy to provide the Photoshop originals!

Posted by Pete Kazanjy at 2:34 PM 31 comments: Links to this post 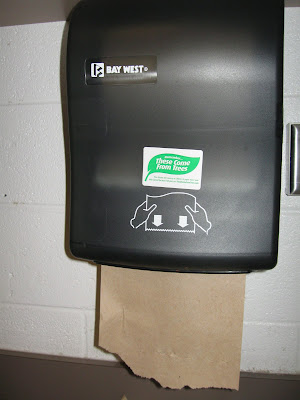 About a year ago, an enterprising teacher from Hunt Valley Elementary School, named Ben James reached out to us to participate in the These Come From Trees K - 12 Education Challenge, and to apply for some complimentary These Come From Trees stickers for posting up around at their school.

Ben had seen TCFT stickers posted at the Denver Aiport (yay Denver TCFT-ers!), and was inspired to investigate on his own. He ended up posting TCFT stickers on all the paper towel dispensers in all the classrooms and bathrooms at Hunt Valley Elementary (a member of the Fairfax County School District in Virginia) and emailed the other teachers letting them know what the stickers were for, and to introduce them to the kids. (That's a picture of the dispenser in Ben's classroom.)

Well, wouldn't you know it, Ben emailed us the other day to let us know that they were doing a post-analysis on their conservation efforts, in particular, looking at how their paper towel conservation worked.

What's more, according to Dotty Lin, Assistant Principal at Hunt Valley, that savings of 34 cases meant real dollars and cents too... $840 in total they didn't have to spend on paper towels. Not bad for 50 stickers--which were free to Hunt Valley as a K - 12 educational organization. (But even if they had paid...$10 for 50 stickers turned into $840 in paper towel savings in a year...wow! Not a bad deal!)

This well-documented case study was great news, because our own testing that provided the "15%" number that we quote on the site was a pretty lightweight, week-long test at a coffee shop--and while we've wanted to do a more meaningful study to gauge impact of TCFT stickers, well, the day job keeps getting in the way!

This data from the folks at Hunt Valley is great proof of These Come From Trees stickers contributing to a successful conservation strategy, whether at a elementary school, high school, higher education institution, or business organization!

I would encourage you to forward this blog post to your facilities team at your office, school, and so on, and see if they can't use TCFT stickers to reduce unintentional overuse of paper towels at your place of work / study!
Posted by Pete Kazanjy at 5:29 PM 321 comments: Links to this post