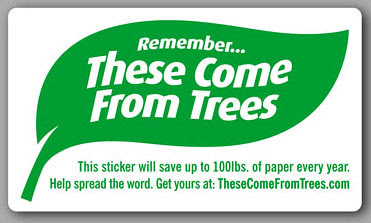 I'll be the first to admit I'm kinda a geek when it comes to using technology to do things day to day. You can see that on this project, in that it has its own blog, uses Paypal for payment processing, Google Analytics to see who's coming and going, Facebook to spread the word virally, and Technorati to see who's linking to this blog.

One of the big pieces of technology I was hoping to leverage is tagging on the photo sharing site Flickr. One of my favorite things on Flickr is the RSS feed I have of the tag "thisisbroken". People all over the world can post up a picture of something that's poorly designed, poorly thought out, poorly executed, or what have you, and tag it "thisisbroken" and I have subscribed to an RSS feed of all those pictures. I get to see the collective wisdom of people who are involved enough (or, hey, I'll admit it, geeky enough) to take a picture of something like that, and share it.

Similarly, I wanted These Come From Trees to be able to do that as well. As you can see, there's a Flickr widget on the right side bar of this blog that has a feed of the most recent pics tagged with "TCFT" (conveniently enough, These Come From Trees is the only project using that tag! It's good to be an early adopter sometimes....).

Well, up till now these pictures had mainly been me taking snaps of These Come From Trees stickers I had put up, using my Treo, and then text messaging them to Flickr.

Today, we had a milestone! Someone besides me tagged a picture "TCFT"! In this case, it was a picture of a trashcan overflowing with paper towels, taken in what looks like Denmark, by a gentleman from Germany: 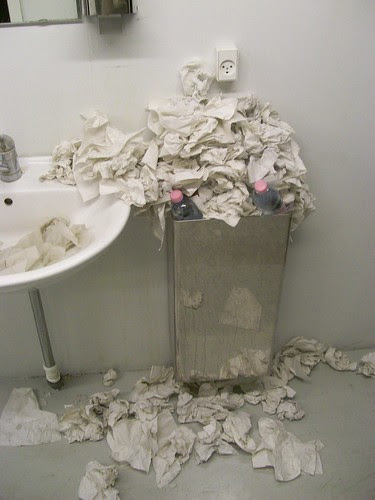 I find that really cool! I hope to see more pictures showing up on Flickr with the "TCFT" tag in the future!
Posted by Pete Kazanjy at 4:19 PM 28 comments: